A solar panel spec sheet provides valuable information about the operating parameters of a panel and can help designers, engineers, and installers determine how to configure a solar PV system.

The panel spec sheet will tell you about the panel’s electrical power production, including its efficiency and how it operates with changing temperatures, as well as mechanical information like the dimensions and wind loads. This information is required to get an accurate performance simulation.

How to read a solar spec sheet

If your first solar spec data sheet looks like a foreign language, don’t be concerned. There’s a lot of unique jargon that goes into it, but we’re here to help you out. Our research engineer, Andrew Gong, will walk you through the terms to know and what to expect.

What is Pmax Rating?

The first value people should pay attention to is the maximum power point, commonly abbreviated to Pmax or MPP rating.

“If you lower the current and increase the voltage, you move away from the maximum power point,” he continues.

Typically, solar panels are rated between 250 and 400 watts. Higher wattage generally means a system will be more efficient and require fewer modules.

Voltage is also an important consideration.

If, for example, a designer decided on 12 panels in a string, it’s important to make sure the voltage doesn’t exceed certain thresholds.

“You want to size the system so it doesn’t exceed 600 volts per string,” Gong explains. Above that, the panel won’t operate as well.

A spec sheet also provides information about the assumptions used to create a panel’s operating parameters.

Another value is the operating cell temperature, says Gong. “Some panels run hotter than others. This value tells you how modules respond to various levels of sunlight.”

It’s also important to understand current in panels. Under the heading of electrical data, a spec sheet provides a rated current.

“If you exceed the current, you destroy the panel,” says Gong. “Maximum current depends on the panel and how many parallel strings in the system,” he says.

Ratings that are important in areas with high winds

In areas of extreme weather — those susceptible to high winds or snow — installers should pay attention to the mechanical or static load ratings.

The front side rating focuses on the snow load, and the back side rating is about the wind load.

The load figures appear in Pascals, a unit of pressure. Higher numbers mean the panel is stronger.

What your solar specifications sheet should include

A specs sheet should have information on the material characteristics, including vital information about the size and dimensions of the solar panels.

The expected operating temperature of a solar cell is important for determining the output it will provide. The Nominal Operating Cell Temperature (NOCT) is the temperature reached by a solar panel under four standard environmental conditions:

NOCT has a major impact on solar panel performance, and must be factored into any solar system planning and optimization.

When silicon in PV cells heats up, they become less efficient. A solar panel’s temperature coefficient shows the relationship between PV output and the temperature of the solar panel, and is represented as the overall percentage decrease in power over for each degree of temperature rise.

This is the available voltage of a connected panel operating at max capacity under standard testing conditions. Most manufacturers rate their panels around 70-80% of the Open Circuit Voltage (VOC).

Maximum Power Point Current (Imp) is the current (amperage) a solar panel produces at maximum power output. It’s the current you want to see when the panel is hooked up to a charge controller under standard test conditions. Imp varies with the intensity of sunlight hitting the panel.

Open Circuit Voltage (Voc) is the maximum voltage a solar panel can produce without a load. Voc is measured at the unconnected terminals of a solar panel to check or test the panel during installation.

Short Circuit Current (Isc) is a measurement of the current produced when the positive and negative terminals of a solar panel are connected to each other. Isc shows the highest current a solar panel can deliver without damaging itself, and is used to determine how many amps a panel can safely handle when connected to a load.

Power tolerance is a measurement of how much power a solar panel can produce below or beyond its rated capacity. For example, a 100 watt panel with a -4%/+4% power tolerance could produce 96 to 106 watts in real-life conditions.

A solar panel’s module efficiency measures how much sunlight hitting the panel is actually converted to electricity. The higher the module efficiency, the fewer panels it takes to get the job done.

Spec sheets also mention warranties. Most have 25-year warranties, according to Gong. Some manufacturers offer a 90% warranty for 10 years, and decrease that amount as the panels age. Premium panels have better warranties.

Hopefully this helps while you’re reviewing your own spec sheet. We highly recommend taking the next step of testing out a solar software platform, it will make the next step for making sure you have a viable setup so much simpler.

Once you’ve gathered this and other data from a spec sheet, you can load the data into Aurora Solar and immediately create a picture of how the panels will fare. It’s super easy, just a few button clicks and you’re on your way. Take an inside look at how it works:

If you have questions, schedule a free, personalized demo and we’ll walk you through anything that doesn’t make sense. 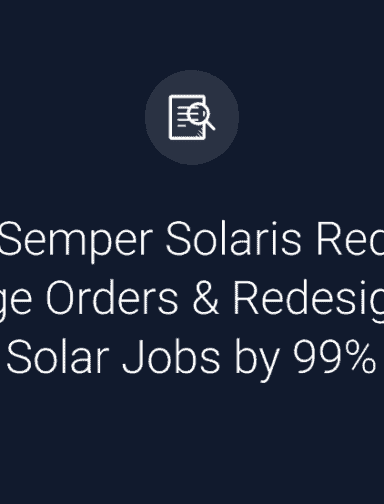 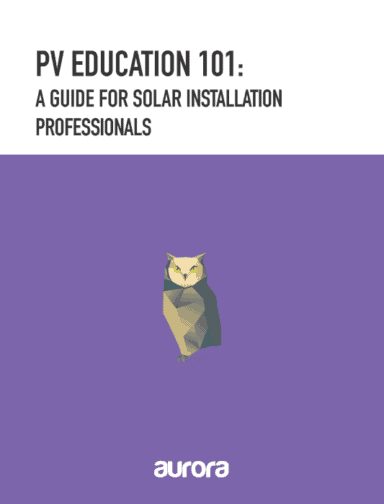